Resaw machines are basically a large band saw that uses a thin, wide blade that moves continuously in one direction to cut lumber lengthwise along the grain of the wood. Unlike a typical band saw, these saws are designed to straight cut lumber only. These machines can be used to cut logs in half, but can also be used for smaller jobs such as cutting boards in half lengthwise. This can be handy if you want thinner boards, but what practical application do resaws have to offer?

Resaws are used in shops to cut thinner boards to be used as flooring, roofing, etc. These machines are also capable of cutting very thin layers from boards and logs to be used as veneer.

Besides cutting the lumber to the desired width, the sawing machine can be equipped with a special blade with some teeth bend inward toward the cutting surface which is used to cut along the woods surface, leaving it with a rustic look. This blade does not cut more than 1/8th of an inch off the woods surface and is not designed to cut lumber thinner like typical resaw equipment. The blade still runs along the board widthwise, however.

Now, the practical application of such a sawed board may not be obvious. These rustic looking boards can be used for flooring, inside walls, and ceilings to give the inside of a home or building a certain rustic look that many people find appealing. 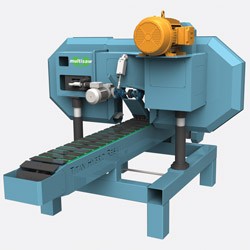 Resaws typically look like an oversized band saw and are equipped with a thin blade, mounted on 2 or more powered wheels, that is wider than a standard band saw blade and designed to make long straight cuts through lumber. The blade has a small kerf, or cutting width, which cuts most efficiently by removing the smallest amount of wood from the lumber while being cut, thus minimizing waste.

The lumber can be fed into the saw either manually or by way of a conveyor system or power feeder. The thickness of the lumber to be cut is controlled by adjustable guides to ensure the uniformity of all cuts made.

The most basic and traditional resaw machine has already been discussed; it looks similar to an oversized band saw. Other types of resaw

3 thoughts on “Resaw Machines: The Versatility of Resaws”