Machines are used in the production of silver or gold coins

First, the raw silver or gold needs to be melted down in the foundry using a high frequency, electric coil furnace. The molten metal can either be manually poured into a graphite mold or poured into a caster which holds the molten metal to be pulled through a graphite mold, also known as a continuous casting machine. The result is a bar or circular billet of silver or gold.

The next process involves the heating up of billets in an oven which are then pushed through a steel die by a powerful hydraulic ram which extrudes the softened metal into strip form. If the metal is already in strip form, then it will go to a milling machine instead which is used to remove the surface layer of the bar to achieve the desired uniform thickness. Then the corner edges are deburred using manual tools or an automatic deburring machine.

Once silver or gold bars or strips of the desired thickness are ready, they are sent to an annealed which is a large machine with a conveyer in which the precious metal bars are placed. The silver and gold bars or strips go through several internal temperature controlled chambers which heat the metal up and cool it down in order to bring the metal to a specific hardness.

Now, the silver and gold bars are ready to go through a breakdown rolling mill consisting of a set of adjustable double steel rollers used to reduce the thickness of the bars to a specific thickness in preparation for the next process. Typically, bars and strips will have to be passed through 2 or more times, each time adjusting the rollers down, to reduce the thickness in small increments since the hardness of the metal is being affected and rolling the bars too quickly will cause the bars to be too hard for further processes.

Next, the silver and gold bars are ready to return to the annealing machine to be softened to a specific hardness. They are run through the oven and cooling sections of the annealer, then checked for accurate hardness and returned through the annealer, if needed, to achieve the desired hardness.

The next machine is another rolling mill called the finish roller. The finish rolling mill is used similar to that of the breakdown rollers accept the silver and gold bars are now reduced down to their final thickness, which is going to be the thickness of the coin. This typically takes 2 or more passes through the milling machine rollers to ensure the hardness of the metal is not too hard for the next process.

Once the bars are the desired thickness, they are ready to be punched into coins using a hydraulic press. In mass production of coins, the press will be set to automatically punch in which the strips are manually fed into the machine by an operator. A set of conveyers is used to move the punched coins to be weighed, inspected, and stacked onto a cart for the next processes. 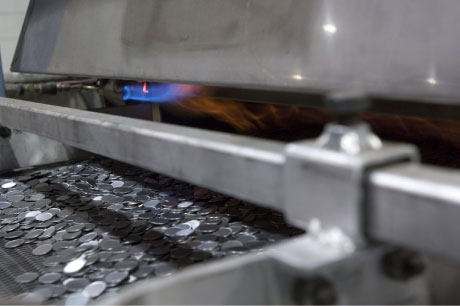