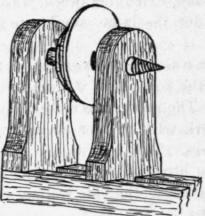 The history of the lathe machine for woodworking can be traced back several thousand years. The earliest woodworking lathes date back to around 1300 BC when the ancient Egyptians first used a two person lathe. It was operated by one person turning the wood piece with a rope, while the second person used a sharp tool to carve into the woods surface.

These simple machines are widely believed to be the first machine tools created. This simple design was later improved upon by the ancient Romans who replaced the rope with a bow to improve the turning process.

Later, during the middle ages, a foot pedal was introduced and hand operation was replaced. This style of machine is known as a spring pole and was commonly used until the early 20th century. This was a major advantage to the wood craftsman because he could now use both hands to hold and guide tools.

The first continuously revolving mechanical lathe on record was depicted in a sketch by Leonardo da Vinci, C. 1480. A treadle lathe with a crankshaft and a large wooden flywheel is shown in his sketch. It was likely that the creation of such a fascinating machine caught da Vinci